My new venture in the education sector got two positive responses and I was excited to start working with them April onwards BUT Covid19 happened and everything went standstill. It took just about 24 hours to shutdown, one of the most densely populated cities of the world, nearly 73000 people live here in every square mile. Mumbai has been my “karam bhumi” since last 17 years. Never have I seen it so quiet, so scared and so weak.

This city of Maharashtra started shutting down from March 15, 2020, onwards.  I stay in Kharghar, a satellite town of this metro. I travel to the western suburbs of Mumbai to teach journalism at a few post-graduate institutes. As I took my last class before the lockdown on March 12, 2020, we were not contemplating a lengthy lockdown.

By the time we were on 15th March, Schools and colleges shut down, board exams got interrupted midway, and students couldn’t get on with their internships or jobs.

My daughter was lucky to finish her class five exams on 11th march, but this was the least of our worries because she is young.  There was anxiety among friends and relatives. A lot of misinformation was on a roll via whatsapp. People began to stock grocery, maids were asked to stay at home and housing societies closed their doors to all outsiders except the sweepers.

Households and businesses in the city went in lockdown mode on their own, learning from the experiences of other countries, like Italy and Iran where things had gone out of control. As of March 20, the total number of coronavirus cases in India has climbed to 195 after over 35 new cases, highest in a single day, emerged from the various parts of the country. Maharashtra has had 48 positive cases, and India recorded five deaths. With a constant increase in the number of COVID positive cases in Mumbai and Pune state’s chief minister Uddhav Thackeray called for a complete shutdown of the city and surrounding areas. He said that from Friday midnight all workplaces would remain closed till March 31. Applicable in Mumbai, MMR Region, Pune, Pimpri Chinchwad and Nagpur. The local trains stood still; busses went off the road, shops shutdown.

My husband was travelling to Mumbai from Punjab. There were very few people at the airport he told us and fewer in the flight. He reached home at 7 pm on March 21 and on March 22, the nation observed “Janta Curfew”. Though states like Kerala and Mumbai were following lockdowns, a lot of people were not expecting a nationwide action, but I guess it was inevitable.

On March 24 at 8 pm in his address to the nation, Prime Minister Narendra Modi declared a 21 day nationwide lockdown. By this time, India had 557 COVID positive patients, and it had claimed ten lives. He said, “there will be a complete ban on stepping out of the house. Every state, every village, union territory is being locked down. This is a step further than the Janata curfew. It is a step that is needed,”

The nationwide lockdown led to something that nobody had factored in perhaps. All the big cities like Mumbai, Delhi etc. have a huge migrant workforce. This worker wanted to reach home before the states seal their borders. I managed to convince my maid and her family to stay put where they are, she is from Madhya pradesh and her son was all set to leave Mumbai since he is a daily wager here. I assured her that I will support her as much as I can and she stayed back. Delhi witnessed a crowd of approx 2lakh people most of them from Bihar and Uttar Pradesh, struggling to get a mode of transport for home. Busses arranged within 24 hours, took these people home. The Delhi government was also able to convince a few to stay back in the shelters too. We got visuals/ news stories coming in from highways in Gujarat and Rajasthan where women, children, pregnant ladies are walking back home. All over India, this economically underprivileged class was walking home. Their only goal was to reach their village safe and sound. These people had either lost their job or were about to lose it, these men and women did not have money to pay rent and buy food next month. So they had no option but to leave for Home. Meanwhile, in Mumbai, the migrant labour movement was much smaller but the number of COVID  cases kept going up.

The scare of COVID was now moving closer home. There were confirmed cases in Kharghar and several other areas of Panvel city Municipal cooperation. Two-three societies had to be sealed, disinfection and sanitisation process was carried out in infected areas. All through this, the people in Mumbai were very patient. They would stand in a queue to buy groceries. Daily needs were readily available. Big grocery retailers did face a shortage of labour, had some issues with delivery and supply chain. Still, they soon ironed out inefficiencies and worked systematically following Physical distancing and sanitisation norms.

Everybody was expecting that by April 14 things would improve; there would be some relaxation in lockdown. The improvement was not even near in sight, COVID positive cases were on a rise in Mumbai. Much before April 14, Maharashtra govt. once again declared an extension. Chief Minister Uddhav Thackeray said that the lockdown announced last month to contain the coronavirus infection will extend at least till April 30.

While work from home became the new normal for many, some industries like the Travel, Hospitality, Finance and Media sector were looking at their worst days. Papers went out of print, TV channels had to work on less than half the staff, Hotels/ restaurants either shut shop or opened their doors as quarantine facilities for doctors, nurses and other professionals, Travel operators are not seeing any recovery for a year or two. Not only this, people are losing money invested in the markets and mutual funds. Job loss was evident. The impact of lockdown on the economy was on the face. International rating agency Fitch has slashed India’s GDP growth rate projections for 2020-21 to 0.8 per cent. The IMF and World Bank have also reduced their expectations from India. They are now projecting a GDP growth rate of 1.9 to 1.5 per cent for 2020-21.

Since I am a freelance journalist and an educator, my streams were also drying up. I finished my syllabus with some online classes on Zoom in March, post that not much has come my way as Schools and colleges are struggling with the new dynamics. Though I am writing for a women’s magazine and have started storytelling sessions on youtube, income is much lesser than the expenditure for this month. It will be like this for the coming few months. My financial anxieties are at bay because I have planned my personal finance well.

As April 14 came closer, another frenzy of buying and stocking food took place. People were sure this time that the lockdown would extend. I spotted a lot of movement in the area, and the police came in everyday with an announcement van, requesting everyone to get inside. Wearing a mask was made compulsory if you were stepping out of the house. Departmental stores and vegetable shops in Mumbai were open through the day, this was done to avoid crowding at the shops. Despite all the precautions and efficient communication among various state departments a  considerable crowd emerged on Mumbai’s Bandra station wanting to go back home on 14th April morning; they were explained and dispersed by evening. 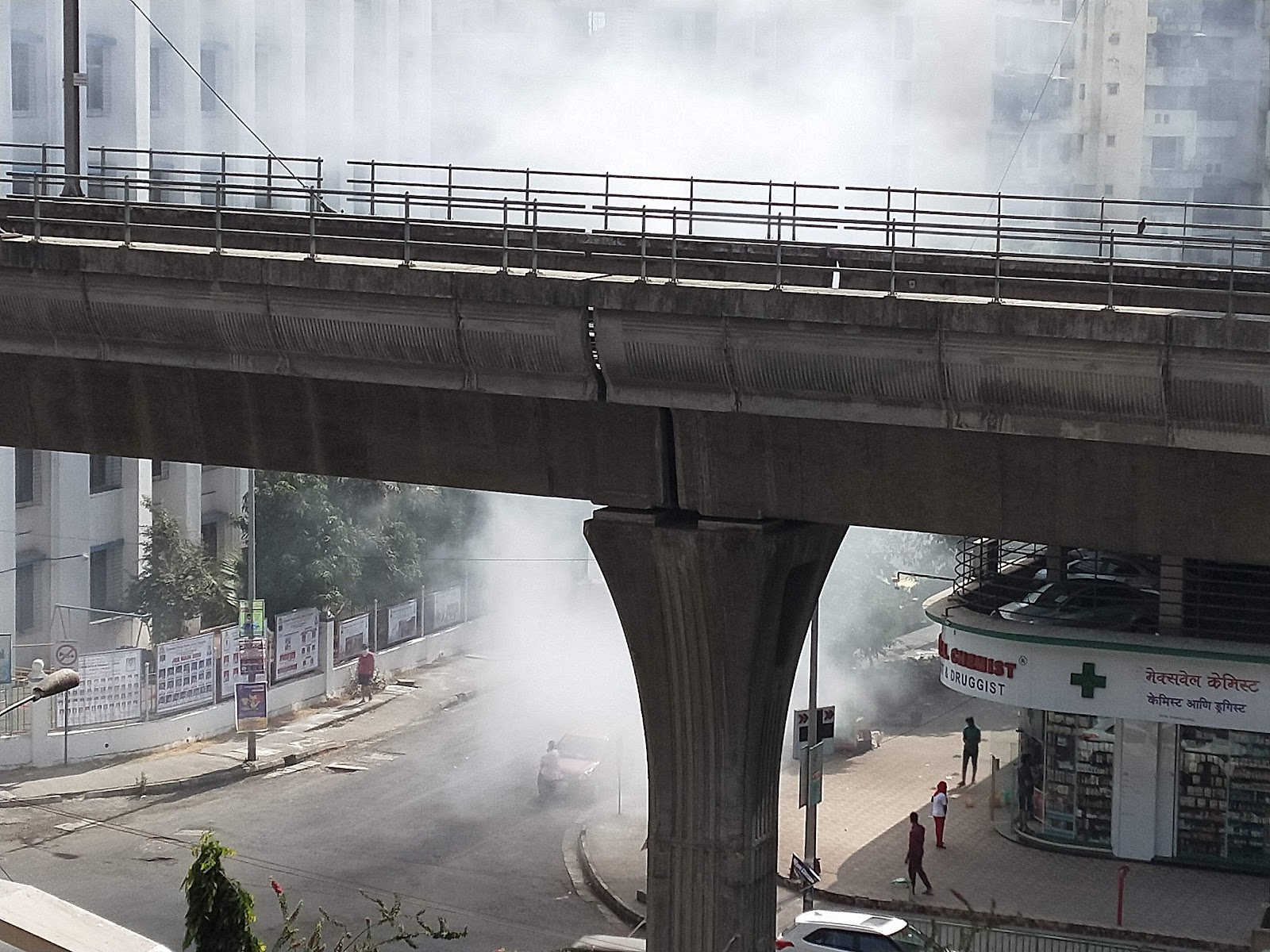 The roads in the city that never sleeps are as quiet as roads in a ghost town. The only vehicles moving are the ones with essential services tags. The banks are open, but they are not letting people enter the premise unless it’s something significant. The availability of things is still good. I can see a few skilled workers like a cobbler, and an ironsmith are now selling vegetables and fruits to earn money so that they can pay their bills.

On April 14 at 10 Am in his address to the nation Prime Minister Modi extended the nationwide lockdown till May 3. This announcement did not come as a shock. People were prepared and ready. Just around this time, a case came up in our building. A heart patient who was in the hospital for about a month was COVID positive in his first test. His family went into quarantine, they disinfected and sanitised the whole building. We self-sealed the premise until we got the family’s test reports. It took about a week full of anxiety and confusion. The patient was in the hospital, and the family was locked in here at home. We provided them with Milk and vegetables. Finally, a doctor came from PCMC and took samples. In 48 hours, the reports told us that they were all negative. One week of anxiety and confusion ended with the sad news of the heart patient breathing his last in the hospital. The times are such that we could not even go to console the family members.

The second phase of lockdown gave a kick to online schooling. My daughter is now studying on Google Suit, and Classroom from 8 am to 2:30 pm. It’s as good as a regular school day. Players like cue math, khan academy and other online learning platforms have improved their game in these days.  Teachers are doing some fantastic work as they take these classes and manage their homes. As everyone is settling in this new routine, including the kids with even their extracurricular activities like dance classes also happening online, there is news of another 15 days extension of lockdown in Maharashtra.

No comments to show.